David Rock of the NeuroLeadership Institute is here to tell us about the 2 most complicated things in the world: The Brain and Change. ASTD2014 session M202 is underway…

If a part of your job is to “make people better”, you are a “coach” says Rock. And although we’ve all been doing it for years and have some expertise, Rock says that unfortunately even if the coach thinks things went well, many coachees say that the coaching was not successful (only about 1 in 20 are, says Rock).

Rock starts with a story of his own experience with being coached, some 16 years ago. He noticed that when his coaches were asking questions, they were often doing it as some kind of “ego-full double-guessing” of the coachee. He had the feeling that although the coach was supposed to avoid giving input and solutions themselves (directive leadership), very often they would still somehow be leading people towards their own (coach) ideas and over-directing the conversation. Rock thinks it would be far more effective to really make the coachee think for themselves and help them to generate insight themselves. That’s what coaching is is for Rock: Facilitating positive change by improving thinking. The role of the coach is to help people to create new unconscious habits to achieve the things they want. And he adds that if you understand the brain, you can do that better.

Rock says that coaches who understand how the brain functions get better results. He says that objective measurements show this. If you look at the change in behaviour and it’s impact on results following the coaching initiative, you can see things are better with a brain-understanding coach, than one who does not have these insights.

OK David, I’m sold. Now tell me what I need to know!

4 steps to get people to a new (unconscious) habit

For people to create new habits, they need to take repetitive action over time. And to actually want to take that action, coachees need to have an insight moment or “ah-ha” moments. This creates better connections in the brain and motivates them for action. And to get that insight, they need to be in a “toward” state. 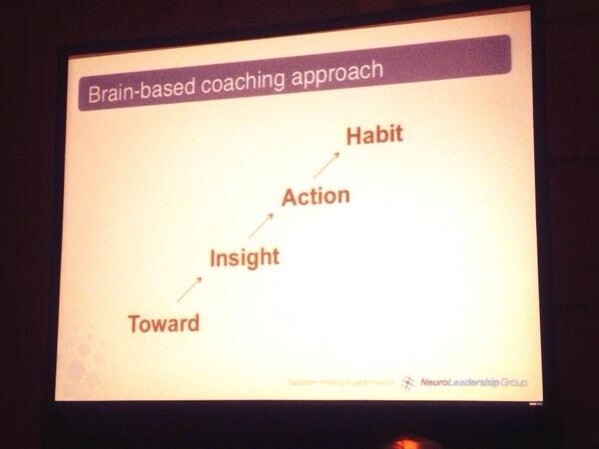 In general, says Rock, much of what happens in the brain at a neural level is about the brain’s perception of whether or not what is going on is good or bad. If it’s good, we want to move toward it and do more (create more neural connections). If it’s bad, we want to move away from it (the brain stops getting involved in things). Rock says quite simply that you cannot create “insight” if the person is in an “away” state.

To create the “toward state” we have to create positive SCARF.

Rock says that there are some simple things we can do to create a more positive SCARF:

What can we do to create more insights?

Regarding the last point: When I hear David Rock saying this, I am thinking about my own coaching sessions and how I use the GROW model. Typically, we might discuss goals and reality before moving toward looking for opportunities to improve things. But Rock says that generally, real insights don’t come when we are trying to have them. They come later, when we are quiet or when we are feeling good (which is generally not when I’m being interrogated by a coach!).

Don’t focus on the problem, focus on how the coachee is thinking

The final lesson I took away from Rock’s session today is that coaches need to change the way they look at what is going on in their coaching sessions. Too often, even if we are not offering solutions (directive style) , we are still there with the coachee trying to solve the problem. We need to stop this. Let the coachee look at the problem we should be looking at the coachee and how he or she is thinking, “going toward” and discovering insights.

The title of this post is a direct quote from a recent training participant. This person works in a scientific environment and was taking part in leadership training in order to prepare for a new role as a cross-functional team leader. Let’s explore….

…vs mentoring
“Giving answers to questions asked by people”

According to the literature and my own experience, coaching has several clear benefits:

In training, the argument against coaching (supported by several participants) was that “we don’t have time for coaching people. Our job (as team leader) is to ensure the work is done on time and to quality. We are assigned people to work on the project and it’s not our role to develop them.”

Coaching IS an investment on the long-term…

A directive non-coaching approach to leadership is right when people are starting up with regard to a task and don’t have the necessary knowledge and skills to help themselves. BUT when people have the ability to figure things out for themselves, coaching can be an excellent approach to build responsibility and initiative.

BUT it takes time! 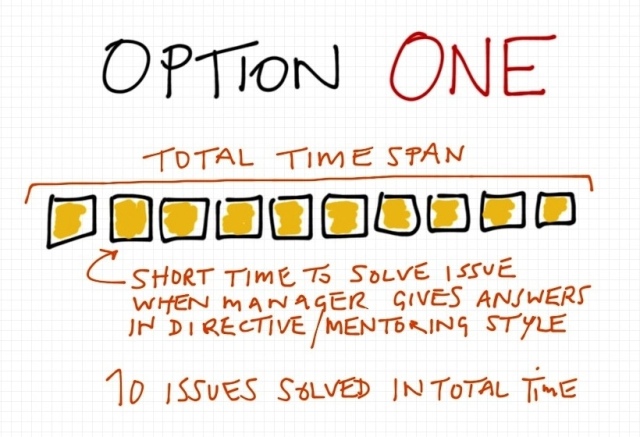 In the above figure, we see the non-coaching approach to helping employees perform. In a given time-frame, many deliverables are achieved quickly.

In the following figure, a coaching approach to supporting employees is used:

This image (not literally) of coaching is what led to the initial trainee reaction on coaching: “We dont have time for that. We need to get all TEN things done, now.”

If we equate results with motivation, responsibility, initiative, development, job-satisfaction…. The non-coaching approach doesn’t deliver much at all.

In addition, it is important to note 4 things (in addition to the benefits noted above) that will happen if we continue to coach our people:

In this sense, there must be a point at which the investment in coaching starts to pay-off. And THAT is key to this blogpost: Coaching is an investment in long-term development, not short-term results.

In his T+D article, Mike Noble suggests that if you really want to get managers onboard for coaching, convinced of its value and ready to invest, you will need to do 5 key things:

Having just completed delivery of a 4-day Leadership Training with @KluwerOpleiding (thanks @MiekWouters for the chance to have a small group :-)) I thought I’d share the email stream that built up from me to participants over the 4-days. Loads of references here…

Homework in preparation for DAY 3

Here are the references from training DAY 3

Homework in preparation for DAY 4

Hope this was interesting